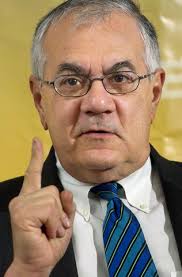 Barney's motives are eerily similar to Pelosi. Was it he?

Like Pelosi, Barney Frank also has a crush on Barack and would hate to see his boy toy be defamed on the world wide web.  But would this bumbling imbecile have it in him to remove those sentences from the Wikipedia entry?  Read the clues below and decide for yourself:

Similar to Pelosi, Barney has a lot of spare time on his hands to make the changes.  He also is, quite literally, in love with Obama.  I also imagine that he spends endless hours on the internet checking his Chemistry.com profile for hits and playing internet spades; thus, leaving plenty of oppurtunites for him to skip over to Wikipedia and make a few edits.  Rather him be surfing the web than yacking in that indecipherable voice, though.  Barney Frank is a true Obama fantard that would no doubt seize any oppurtunity for some butt-kissing.

Also like Pelosi, Frank is many years old.  Though he can efficiently surf Chemistry.com and has mastered internet spades, he does not have a preprogrammed memory cell that contains instructions for browsing Wikipedia.  At the same time, ole Barney knows what it’s like to have skeletons in the closet and would no doubt jump at the chance to eliminate Big O’s for him.  I think Barney Frank is a true contendor for the conpsirator of WikiGate.

Barney certainly has the motive to commit this deed, but like Pelosi, he has age and inteligence constraints that would have held him back in the moment of editing the page.  Do you think it was Barney Frank?  How do you think he stacks up compared to Nancy Pelosi on the guilt-o-meter?  Leave comments below or send us an e-mail at theconservativejournal@gmail.com.  Also don’t forget to subscribe to our RSS feed so you never miss an update in this ongoing saga!

Thanks for reading and participating!

** Sorry there was no suspect yesterday.  As I said in the poll of the day, I was experiencing internet problems and couldn’t access the site!  Sorry for the inconvenience!